January 26, 2018 / Vancouver, BC / NRG Metals Inc. (“NRG” or the “Company”) (TSX-V: NGZ)(OTCQB: NRGMF) (Frankfurt OGPN), is pleased to announce the results of a recent sampling program at the Company’s 3,237 hectare Hombre Muerto Norte lithium project in Salta Province, Argentina. The results are summarized in the following table.

Jose de Castro, COO of NRG, commented “We are delighted by the by the high lithium values and the favorable low Mg/Li ratios at Hombre Muerto Norte. NRG recently obtained permits from the provincial government of Salta for drilling and construction of evaporation test ponds, and the Company expects to award a drilling contract and commence construction of the test ponds shortly.”

The Hombre Muerto Norte project is located at the northern end of the prolific Hombre Muerto Salar, adjacent to FMC’s producing Fenix lithium mine and Galaxy Resources’ Sal de Vida development stage project. The Fenix mine is the largest producing lithium mine in Argentina, and the Sal de Vida project is the largest development stage lithium project in Argentina. The location of the samples is shown on the following map. 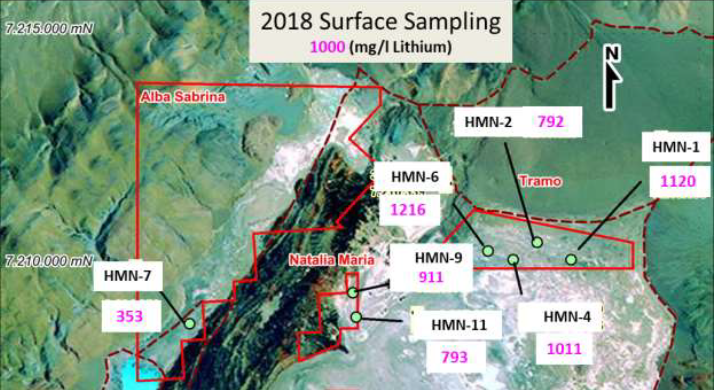 The sampling was conducted during the second week of January and supervised by Mark Rosko of Montgomery & Associates of Santiago, Chile. Mr. Rosko is a Qualified Person under National Instrument 43-101. Measurements in the field included pH, conductivity, temperature and density, and the field measurements were consistent with the same measurements made in the laboratory. The samples were analyzed by the Alex Stewart laboratory in Jujuy, Argentina. Alex Stewart employed Inductively Coupled Plasma Optical Emission Spectrometry (“ICP-OES”) as the analytical technique for the primary constituents of interest, including those shown in the table. Alex Stewart maintains a strict internal QA/QC program employing multiple standards, re-analyses by AA and calculation of ionic balances. Mr. Rosko introduced blanks and duplicate samples for QA/QC, and all QA/QC results corroborate the analyses reported in this press release.

As reported in the Company’s 43-101 Technical Report dated October 2017, CSAMT geophysical data (controlled source audio-frequency magneto-tellurics) suggests that the brine zone may extend to considerable depth, as illustrated on the following cross section that extends from the Alba Sabrina property on the west to the Tramo property on the east. 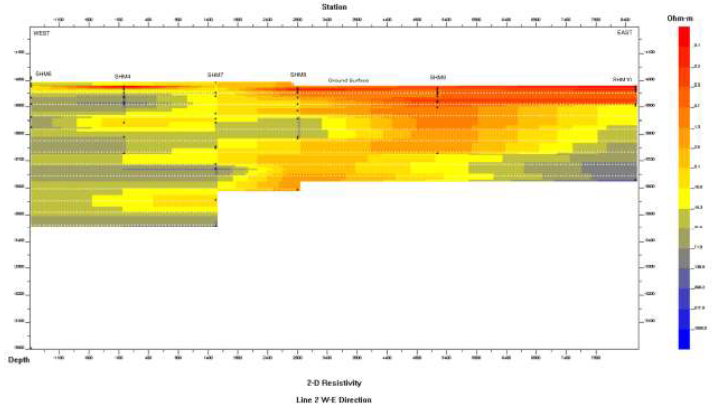 NRG Metals Inc. is an exploration stage company focused on the advancement of lithium brine projects in Argentina. In addition to the Hombre Muerto Norte project, the Company is evaluating its 29,000 hectare Salar Escondido project in Catamarca province where the company recently completed the first drill hole that proved the Company’s conceptual model of a buried lithium brine target.

Mr. Rosko supervised and approves the scientific and technical disclosure contained in this press release.

This news release contains certain “forward- looking statements” within the meaning of Section 21E of the United States Securities and Exchange Act of 1934, as amended. Except for statements of historical fact relating to the Company, certain information contained herein constitutes forward- looking statements. Forward-looking statements are based upon opinions and estimates of management at the date the statements are made, and are subject to a variety of risks and uncertainties and other factors which could cause actual results to differ materially from those projected in the forward looking statements. The reader is cautioned not to place undue reliance on forward-looking statements. The transaction described in this news release is subject to a variety of conditions and risks which include but are not limited to: regulatory approval, shareholder approval, market conditions, legal due diligence for claim validity, financing, political risk, security risks at the property locations and other risks. As such, the reader is cautioned that there can be no guarantee that this transaction will complete as described in this news release. We seek safe harbour.